We cite the dusky kob as a species unsuitable for Commercial Aquaculture because it fails to to qualify as a Closed Loop species in our analysis.

The Closed Loop hypothesis is a device of our own making. A Closed Loop species is one that may be considered for Commercial Aquaculture and it is an absolute requirement before moving forward with any Project development. Species that are not Closed Loop may still be considered but with the understanding that risk, and the areas of concern within the Loop will require considerable risk mitigation.

When selecting a species to be considered for Commercial Aquaculture it is risky to be the first to do so with a species. There are often cogent reasons why a particular species is not being farmed commercially elsewhere and a sober, rational analysis is required in order to understand why.

Dusky kob presents an ideal case study in this regard. Dusky kob is native to South Africa. It grows well under conditions that can be replicated in differing aquaculture environments including RAS and it has a ready market. Some academic grow out trials have been conducted and considerable local academic research has taken place with the species.

So why is is not a Closed Loop species? 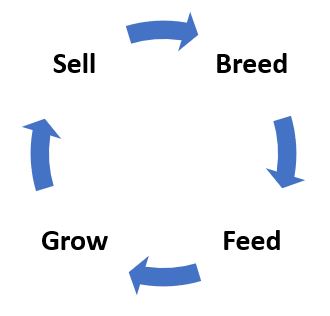 The 4 questions we ask are as follows:

Stepping through the Loop then we find the following:

Can we breed them?

In our opinion the breeding of kabeljou is not sufficiently proven.  Parent stock have to be wild caught. It can take upto two years for parent stock to settle down into captive conditions, and develop into breeding condition. Breeding is not yet replicable, on demand. A proven hatchery management cycle suitable for year round production of fry for a Commercial Aquaculture operation has never been established. Alternative sources of fry in the event of a hatchery failure are as yet, still unavailable.

The implications of this for a Commercial Aquaculture operation are onerous. The operation may sit without fingerling supply to grow, quite possibly for several months at a time. Options to buy in fingerlings, almost at any cost, do not exist. Any setback in hatchery production thus has severe consequences on the business to be able to produce product.

Can we feed them?

Academic research and some commercial development of feed has taken place. However feed formulation remains proprietary which means a new operation will need to either develop their own feed formulation, a process that doesn’t happen overnight, buy in a feed formulation, or buy in feed from a third party feed manufacturer. In all cases a feed conversion chart for the specific feed in case doesn’t yet exist with a measurable degree of credibility backed by independently verified data.

The implications of this are that a Commercial Aquaculture operation is feeding its fish on a largely trial and error basis. Money and time will have to be invested to verify feed conversion ratios and the impact of differing recipe formulations. Risk lies in that supply of dusky kob feed is not consistently available to similar standards from local suppliers. In a pinch feed can be imported but there are implications for management in lead times, storage of feed onsite under suitable conditions and of course the price of feed. A setback in feed variance or inconsistency can be hard for management to overcome and a knock on effect on production can have deleterious financial consequences.

Can we grow them?

We believe that dusky kob can be farmed under differing aquaculture conditions. This does not make them financially viable because the risk lies in achieving (within RAS) the correct design to allow for the correct stocking densities and growth rates to be optimized. No such data exists from existing operations or from similar operations globally.

The implications of this are that growth trials under differing conditions will have to be conducted to establish what can be achieved. This will then determine commercial viability or not. Current academic studies are indicative, but not definitive as most trials have not been conducted under commercial conditions, or for a complete growth cycle. A time frame for suitable growth verification trials and associated cost has to be considered.

Can we sell them?

Dusky kob is well known locally as a premium plate fish. There is sufficient research available that the answer to the question is yes, they can be sold. Note that at this stage we are not asking if the species can be sold on a financially viable basis – since that after all is why we undergo the business study process to begin with. All we want to establish at this time is that the species is already being sold, can be sold, that there is demand for it and at what level.

In the case of freshwater catfish for instance, these questions may be harder to answer in the affirmative with the implication that market development costs may have to be included.

The dusky kob cannot be considered a Closed Loop species. If Commercial Aquaculture is to be considered with the species, investors will need to prove the breeding case, with sufficient risk mitigation against breeding failure. The same is true of feed and of growing the fish. It can be done with the attendant investment and development of replicable know how to scale to commercial levels. This will take time and investment and both of these factors should be contextualised and accurately costed within the business case study developed.